I was intending to write this blog long time ago but I haven’t. Perhaps deep down I didn’t feel the time was right. The account I can share with you now seem more complete and honouring of the energies involved.

Some time ago I set out to find a new magickal name for myself. After few weeks I arrived at the name Dana. This resonated with me on a very deep level but as a name on its own it felt incomplete. I decided that I needed the second name to form a full magickal name. I knew that my search needs to continue but I couldn’t have predicted weird direction it took.

The realisation of my true name as Dana took place just after I came back from travel to my home town Krakow. At the same time @anton was performing his Summoning Storm Operation. My return from Krakow coincided with Anton completing the operation. We had a plan to do a ritual to protect and avenge the poisoned red kites which I described in more detail on Red Magic site. As explained in Releasing the Boar this ritual highlighted my close connection to the spirit of the Wild Boar.

After the ritual I felt inspired to read more about the boar. As I was doing my research I came across Boar God Varaha, manifestation of Vishnu. In one legend he rescues the earth from asura Hiranyaksha carrying her out of the ocean on his tusks. 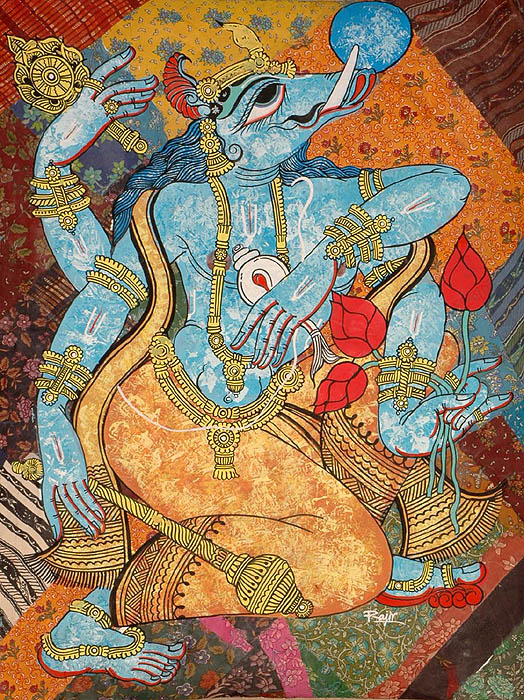 The representation captured my imagination. The Varaha image seems so in tune with the boar ritual performed earlier. I find difficult to imagine a being better suited tomagick orientated on environmental issues than planet saving boar. I haven’t heard of Varaha prior to doing the boar ritual and yet he was so present in the work. I knew I was up to something here. The only aspect that wasn’t clear to me was the connection of this boar to anger released during the rite. I decided to read on.

I soon learned that God Varaha has a corresponding Shakti, Goddess Varahi. Shakti represents cosmic, creative power, agent of change. This Shakti was then, the active component in the Boar Rite. She is portrayed with a head of a sow (boar). Sometimes she is portrayed dancing and sometimes riding on a mount. One of her mounts is Garuda bird. This reinforces the synchronicity since Garuda  was present in our magick as protector of the birds.

She represents terrible aspect of Divine mother. Her worship happens at night. She is called upon to destroy ones enemies. This means people who wish us not well, engage in public slander against us and harm us in any way. Another meaning of the enemy is that of psychic forces, subconscious feelings and drives that become destructive to us. That’s the connection to released anger. Goddess Varahi’s power resides in her nose, her breath. During the rite I was exhaling rapidly through my nose. It was a spontaneous action.

Varahi is a complex deity with many aspects and to summarise all connections and  synchronisities here would be beyond my ability. It’s enough to say that to choose Varahi as my second name is to honour my previous name Lolita (through connection to Lalita,Tripurasundari) just like Dana honours my birth name Anna. It also means stronger integration of Agent V into my identity (which has been happening for some time now). As I contemplated the possibility I was becoming more and more amazed at it. With it came a sense of release and strength I haven’t felt before. I had no doubt that I don’t need to search any further.

Varahi is said to dig into your subconscious just like wild boar digs its tusks in the soil. She digs out all that’s suppressed and hidden. Since I took her name I felt a profound change. I spent a lot of time in contemplation, thinking about my place in the world, meaning of my life, its direction.  I looked into my past and future with more confidence and courage and from that emerged realisation of what I need to do.

In last week this realisation became clear. It is my decision to learn counselling and hypnotherapy and begin practice. I have a vague idea of how to go about it. It seems crazy but it seems right. I know I can do it.

Some people think that choosing a magickal name is a simple glamour magic. I hope this account and what unfolds from it demonstrate otherwise. Choosing your own name can become a transformative experience, a true initiation.

2 thoughts on “Transformation of Identity. (searching for magickal name pt2)”